Головна | NewsOld | One URCS volunteer’s way from Nigeria to Vyshgorod

One URCS volunteer’s way from Nigeria to Vyshgorod 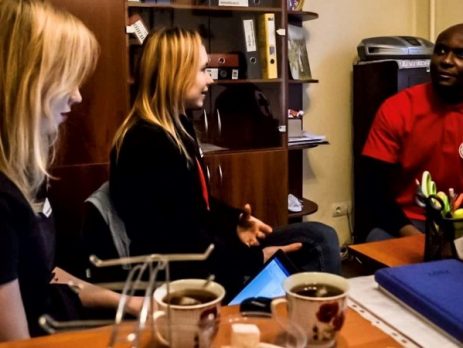 One URCS volunteer’s way from Nigeria to Vyshgorod

Nine years have passed since Eduvie Donald, a volunteer and an English teacher for the Vyshgorod district branch of the Ukrainian Red Cross Society, moved from Nigeria to Ukraine to study. Today he has firmly established himself in Ukraine with the country representing home for both him and his family. Settling down in a foreign country succeeded much as the combination of courage and positive attitude, which are values that Eduvie now wants to teach his students as well.

Nine years ago Eduvie Donald first stepped onto Ukrainian soil. The young man, originally from the Southern part of Nigeria, had been invited to complete a bachelor’s degree in business at one of the universities in Kyiv. Adapting to a foreign culture did not prove the easiest process but progressed with time.

“There were a lot of surprises first. Some cultural habits felt strange to me and it also took some time to open myself to Ukrainian delicacies. However, nowadays I love the food here and, of course, the Ukrainian ‘kompot’!”

It was Eduvie’s open mind and empathetic personality that helped him overcome many of the cultural and language barriers. Finding a local Ukrainian friend was the turning point for him in fully settling down into the country.

“When I came here, there was at first distance between me and the people. It was maybe the first time that they saw a student with dark skin. But then I met a local friend who did not see my skin colour but saw me as a human being. The love that my friend showed, changed me entirely. There are racists everywhere, but there are good people too in all places.”

Having found a liking for Ukraine, Eduvie later proceeded onto master’s studies in project management in Kyiv and did well in his studies.

“I was the first student to have a both Ukrainian and American diploma from university at the same time! After that I worked in one of the financial sales companies in Kyiv, but I found it tedious and decided to change jobs. I wanted to build something that I could be proud of in the future – like teaching people and listening to people.”

It was that aspiration that later made Eduvie also an active volunteer in the Vyshgorod branch of the Ukrainian Red Cross Society.. Nowadays he holds weekly English classes for children who are aged nine to thirteen. He describes his motivation for volunteering being based also on the want to give back to the community.

“I have been a huge beneficiary of Ukraine and Ukrainians and giving back to communities has always been a part of my mentality. It is something that my mother taught me already at an early age.”

Despite that, not everyone Eduvie meets always understands why someone would choose to spend several hours doing something that they do not get paid for.

“Even my friends have been asking me why I am doing this for free. ‘Eduvie, are you serious?’, they have asked. But when I start something, I also finish it. I gave my word to the Red Cross and I keep my word. What I am doing is not for myself, it is for my children. Putting smiling faces on these children once a week is by no means a burden.”

Eduvie is also happy about the fact how volunteering with the Ukrainian Red Cross Society has changed that way that his hometown, Vyshgorod, views him.

“Before volunteering, kids did not see me, but nowadays they welcome me with open arms and high fives. And that is what I want. It makes me feel happy. I am part of the family now.”

And there are no plans to leave Vyshgorod in the near future.

“I came to Ukraine as a student and now I have a degree, a wife and two kids. I can find my way with the Russian and Ukrainian language. Why would I leave the country anymore?”