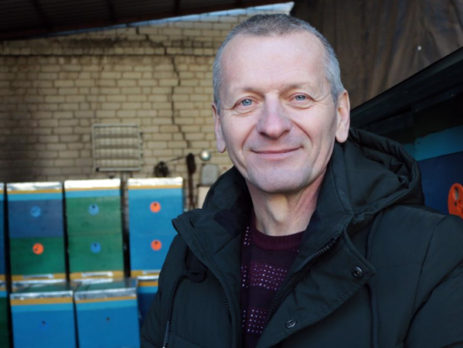 Evgenii Novikov gently sweeps snow from the base of one of his colourful beehives and starts to tell a story about how a tiny insect gave him back his life.

When the former soldier returned to his hometown of Pavlograd from the conflict zone in Ukraine’s east, he found that everything had changed. There were no jobs, and his family, friends and neighbours did not understand what he had been through.

“When servicemen return from the conflict zone, they bring a different mindset that is difficult for others to understand. This can result in mental health issues and a distance between them and their loved ones,” Evgenii explains.

Evgenii, 56, was thrown a lifeline when the Red Cross told him about its livelihoods scheme. With five other former soldiers, he used a grant of 6,000 Swiss francs to buy 50 beehives and build up a business.

“When you work on an apiary and devote yourself to beekeeping, you’ll start feeling better because you see a creature who works and does good. You can approach them only with love and they repay it in kind.

“Bees work together as a family and make you understand that life never stops. If you adopt the same attitude and devote yourself to the work, your problems and sorrows eventually disappear.”

Luckily, two members of the group had experience with bees. Evgenii became the manager of the company and handles administrative tasks, while the others do the manual work.

He says there is a good demand for the honey from factories and local markets, and they plan to increase the number of beehives to 1,000 in a few years. But the bees provide more than just an income.

“All the guys feel emotionally uplifted as a result. It improves their relationships with their families and their communities.”

“We can become a good example for other people,” he concludes.

Since the start of the conflict five years ago, more than 25,000 people in Ukraine has received support through the joint livelihoods scheme of the IFRC and the Ukrainian Red Cross in the form of food vouchers, small business grants or multipurpose cash grants.