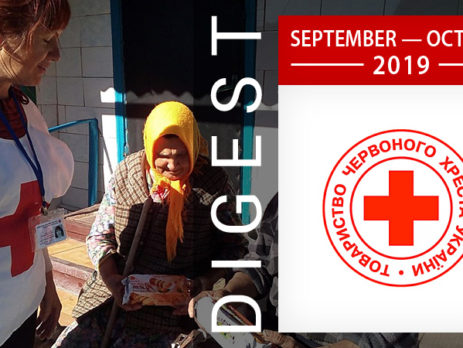 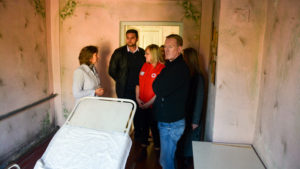 Supporting the population in eastern Ukraine

On October 9-10, a delegation consisting of the Director General of the National Committee of the URCS, Liliia Bilous, the Secretary General of the German Red Cross, Christian Reiter, the Head of the Cooperation Department with Europe, Latin America and Central Asia of the German Red Cross, Mario Geiger, visited Donetsk region. Within the framework of the visit, the presentation of the new project “Life Line: Support for conflict affected people in Ukraine with MPC and improved health infrastructure”, to be implemented by URCS with the support of the German Red Cross in collaboration with Luxembourg Red Cross. The project is planned to reconstruct rural health post and two outpatient clinics. New medical equipment will be purchased for these establishments, serving residents of 24 villages. Multi-purpose financial assistance will also be provided as 6 365 of the most vulnerable will receive support. In additions, there will be organized lectures for the population and trainings for the medical staff. The total amount of assistance provided under the project will be € 1.42 million. 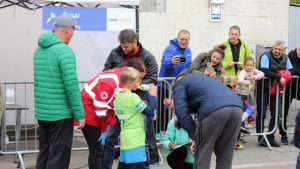 Emergency response teams of the URCS regularly attend and provide first aid at mass events across the country. On September 3, in Kherson, the local ERT, together with the State Emergency Service of Ukraine, conducted a training with the scenario of a gas explosion at a hotel. On September 15 in Kharkiv, the ERT provided first aid to the victims of the KharkivPride Equality March. In Odessa, a volunteer rescued a man trying to commit suicide near a city park in Odessa. On October 5-6, 68 volunteers provided first aid to the runners of the 10th Kiev International Marathon, attended by over 17,000 athletes. Two representatives of the Society’s ERT visited Georgia, where they conducted a training on “Basic Principles and Principles of Operation of the ERTs” and shared their experience with local colleagues. On October 14, the ERT of the National Committee rendered first aid to the participants of the celebration in the center of Kiev, attended by about 19,000 people. 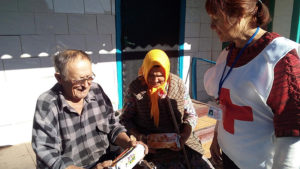 Local URCS organizations continue to support the vulnerable. For example, on October 1, on the International Day of Older Persons, Luhansk and Ternopil oblast organizations welcomed the elderly with food parcels. In Kryvyi Rih (Dnipropetrovsk region), disabled locals received meat products. Wheelchairs were handed over to people with disabilities in Myrnohrad (Donetsk region) and Kyiv. 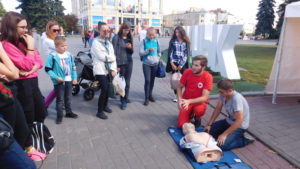 On September 14, the international community commemorated World First Aid Day, which focused on “First Aid and excluded people”. On this occasion, local branches of the National Society all around the country carried out thematic campaigns under the slogan “Don’t leave a person in danger! Anyone can help.” For example, in Severodonetsk, in the region of Luhansk, volunteers held a series of workshops for students. In Ternopil a similar event was held for the children of an orphanage. After the educational session children could test their acquired knowledge through game simulations. In Lutsk, volunteers gave information about first aid at the central square of the city. 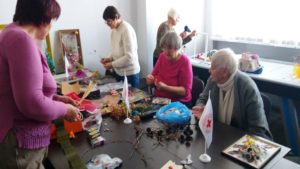 Psychosocial support for vulnerable groups is underway. Thanks to volunteers, the elderly of Mariinka (Donetsk region) learned to use a computer and mastered floristry. Meetings were held for the pupils of Donetsk region, at which the children learned in a playful manner about the nature of emotions and interpersonal relationships. On October 10, on the Day of Mental Health, the Luhansk Regional branch carried out information campaigns reminding residents of Severodonetsk, Lysychansk and Starobilsk about the importance of taking care about one’s mental wellbeing. The Children’s Creativity Day took place in the center of Ternopil and gave the chance for children to showcase their talents. 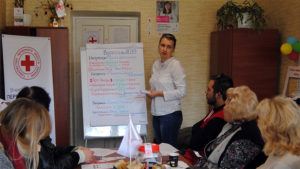 On September 26, an information session on international humanitarian law (IHL) was held at the Bakhmut City Distric tbranch as part of a monthly volunteer coordination meeting. Volunteers learned about the concept of IHL, its history, restoring family links, and more. There are currently 27 certified IHL trainers in the National Society. International humanitarian law protects those who do not participate in hostilities and restricts the means and methods of warfare. It is through IHL that the Red Cross is able to do its work to assist the victims of the armed conflict. 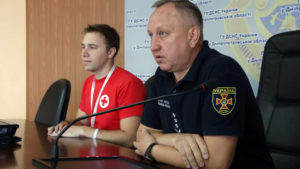 URCS, with the support of the International Committee of the Red Cross, continues to implement a project to reduce the risks posed by landmines and explosive remnants of war. On September 19, a representative of the National Committee of URCS held an appropriate seminar for employees of the State Emergency Service of Ukraine of Dnipropetrovsk region. The participants developed practical skills in informing locals of different age about explosive objects. Rescuers learned the methodology of working with children and adults, received explanatory leaflets as well as posters. It should be noted that URCS volunteers regularly hold information sessions on mine risk in educational establishments of Donetsk and Luhansk regions. 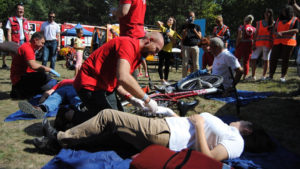 Increasing the capacity to respond to emergencies

Representatives of partner national societies and organizations from Belarus, Moldova and Bulgaria visited Ukraine as well as the URCS participating in the project “‘Promoting the role of volunteers and the population in Civil Protection (ProVoice)”. On September 14, delegates took part in the Security Fest in Zaporozhye city, where they learned about the Ukrainian experience of working with the public in cooperation with civil protection authorities. As part of the event, residents were told how to prepare for an emergency and what to do in the event of a fire, gas leak or explosion. Workshops and demonstrations also taught participants road safety (how to provide first aid in an accident) and mine security. 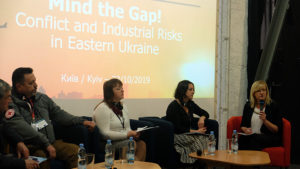 On 23 October 2019, the 3P Consortium held a conference in Kyiv aimed at raising awareness of conflict and industrial risks in eastern Ukraine, and particular vulnerabilities of the conflict-affected communities and systems. Local, regional and national authorities, including representatives of the Government of Ukraine, participated in the conference along with representatives from the humanitarian and development communities, foreign investors, and Ukrainian civil society organisations.
The conference, funded by the European Union through its Civil Protection and Humanitarian Aid Operations department, addressed three key aspects of disaster risk management:
– Risks: Decaying industry in eastern Ukraine increases the risk of an ecological disaster – with armed conflict still unfolding in the region, this could affect millions of people on both sides of the line of contact. Making area-based information on these risks available can enable evidence-based preparedness and planning.
– People: In an emergency, local communities are the first to be affected, and often the first to respond. Communities know best their own needs, capacities and gaps: including them in planning is crucial. Prepared communities save lives.
– Law: Global, national and non-governmental disaster risk reduction policy frameworks and initiatives can guide the ongoing reforms of the civil protection and environmental safety sectors in Ukraine and enhance preparedness to, prevention, and protection of civilians during disasters.
3P Consortium partners will, based on these priorities, refine their activity roadmap for the coming year, and support multi-stakeholder coalitions to enhance efforts towards sound disaster risk management in eastern Ukraine, in line with commitments made under the Sendai Framework for Disaster Risk Reduction 2015-2030.
The 3P Consortium’s work is part of the international response to the conflict in eastern Ukraine, which has affected 5.2 million people since 2014. Today, over 3 million people remain in need of humanitarian aid, and 6 years of fighting in eastern Ukraine have left the civilian population vulnerable to conflict-related risks, such as shelling or prolonged cuts of services. The protracted conflict has also increased the risks posed by industrial and environmental hazards present in this historically heavily industrialised area. Notably, a substantial number of such hazards sit close to the ‘line of contact’, where fighting still takes place almost daily. It is therefore paramount to reinforce local authorities’ capacity to prevent a large-scale disaster through improved planning, prepare communities to respond to these risks, and enhance capacities to protect the civilian population should a disaster strike. 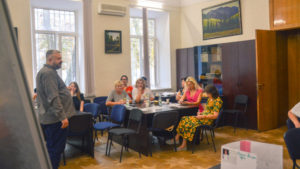 Organizational development of the URCS

On September 9-12, 20 employees and volunteers of local branches of URCS in Kyiv region were trained under the program “Mobile Training Teams”. For the first time, the coaches of the Society raised the level of awareness and professional knowledge of representatives of local organizations. Trainers held hands-on sessions to build capacity on the following key topics: financial management, budgeting, communications, relations with communities and local authorities, project applications, volunteering, resource mobilization, fundraising, reporting, and more. The goal of mobile teams is to provide practical and specific guidance and tools for the day-to-day work of local organizations as well as to answer questions that are often asked by local organizations’ employees and volunteers. Volunteers and employees of the Chernivtsi and Kherson regional branches received similar training. 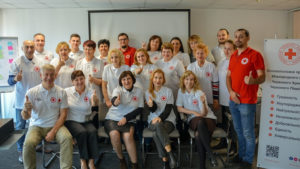 On October 16-17, in Zaporozhye, there was held the final meeting of the Livelihoods project that has been implemented in the regions of Donetsk and Luhansk. Experiences related to project implementation were discussed in addition to which the team discussed plans for next year. New colleagues were familiarized with the different stages of the program and received tips for carrying out their work in the regions. Since the start of the project in 2017, hundreds of households have received training and financial support (grants) for their businesses. As people get the chance to start and develop their own businesses also the well-being of their families increases and the local economy is strengthened. 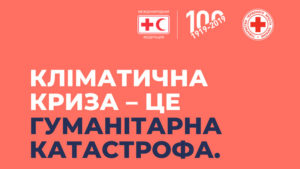 The National Society has joined the global #FacesOfClimateChange campaign, initiated by the International Federation of Red Cross and Red Crescent Societies. On the URCS social media pages you can find more information about issues posed by climate change and tips for practicing more eco-conscious behavior, for example how to eat better, use different modes of transport and save electricity. Volunteers in different regions of Ukraine have already joined the campaign by organizing park cleanups.