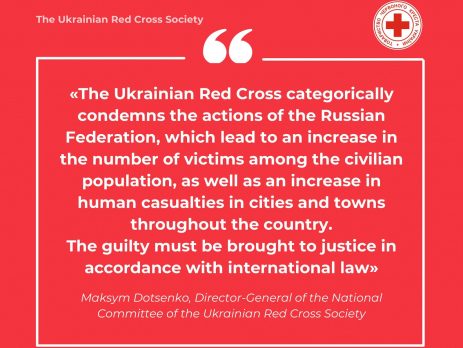 Today, October 10, 2022, after the mass shelling of Ukrainian cities by the Russian Federation, deliberate intentions to destroy the objects of critical infrastructure of Ukraine are evident, which leads to the deterioration of the humanitarian situation in the country.
Today’s attacks are a flagrant violation of the norms and rules of warfare.

«The Ukrainian Red Cross categorically condemns the actions of the aggressor country, which lead to an increase in the number of victims among the civilian population, as well as an increase in human casualties in cities and towns throughout the country. The guilty must be brought to justice in accordance with international law», – emphasized Maksym Dotsenko, Director-General of the National Committee of the Ukrainian Red Cross Society.

Today, the Ukrainian Red Cross works in an intensified mode and does everything possible to overcome the humanitarian crisis in the country and help the affected Ukrainians.