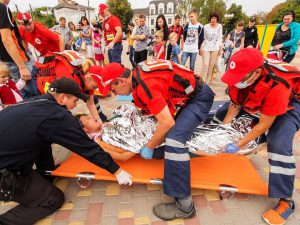 The main aim of the Society’s activity is to ensure human life protection, prevention and mitigation of human suffering during armed conflicts, natural disasters, catastrophes and accidents, support to medical services of the armed forces and public healthcare services, assist public authorities of Ukraine in their activities in the humanitarian field.

«…The objective is achieved unbiasedly, without any discrimination based on nationality, race, gender, religion, language, class or political convictions…»

(The extract from the Charter of the Ukrainian Red Cross Society)

The National Committee is the organization of national (central) level and it is the executive board of the Society.

The organizations of local level are city, district and city-and-district organizations that are the integral part of the regional ones and are subordinated to them.

2013-2017. The Society works in a special mode: Emergency Response Teams are created to provide aid to those who were affected during the civil unrest, especially in Kyiv, Kharkiv, Donetsk, Luhansk, Dnipropetrovsk, Kherson, Odesa, Mykolaiv, Vinnytsya and Vinnytsya region. The Society focuses on support to the affected and displaced people from the conflict zone and the Crimea, continuing to provide care to the vulnerable population. The Society is developing the psychosocial support as a direction of its activity.

The Ukrainian Red Cross Society cooperates with 21 national societies in the foreign countries based on the cooperation agreements signed. Thus, more than 20 humanitarian programs are implemented annually with the financial support of the international partners.

The Ukrainian Red Cross Society is one of the key developers of the strategy for The International Red Cross Movement on preparation for response to nuclear, radiological, biological and chemical emergencies.

Special attention is given to cooperation with the international organizations and foundations (such as UNDP, UNICEF, UNFPA, ECHO, WEP, GIZ, WHO, UNHER etc.) as for support of the Society’s humanitarian programs.