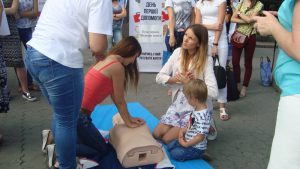 National Society is actively involved in solving problems of health and safety. An important part of this area is first aid training for the population. First aid training program on a population training system was established by the National Committee of the Ukrainian Red Cross Society and has been implemented since 2011. The National Society has 76 trainers and 350 instructors trained according to the international standards who have already carried out more than 72,000 trainings among the population. Total number of the population trained in 2015 is more than 20 000 people.

Training programs of the Ukrainian Red Cross Society are certified by the reference centre of the International Federation of Red Cross and Red Crescent Societies.