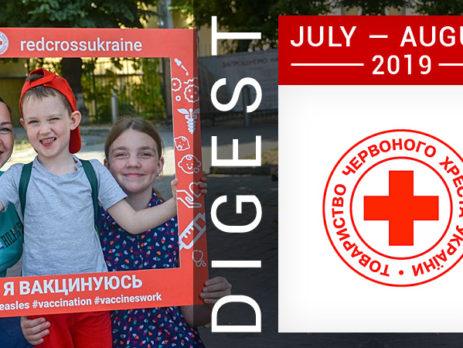 On July 9th at 4:10 am in Lysychansk (Lugansk region) there was a threat of destruction of a dwelling house which already had been in emergency state. Rescuers evacuated 61 people from the building, including 22 children. The emergency response team provided the residents with drinking water. Volunteers also provided psychosocial support to the evacuees. On the night of August 3rd and 4th in the village of Mologa (Odessa region), a mud stream flooded 360 houses (average water level – 1.5 m), and about 1,040 people were injured. After assessing the needs of the population, the Odessa regional branch of the URCS delivered 80 blankets, 150 sets of linen, 110 packs of laundry detergent and 45 packs of universal cleaning gel to the residents of the disaster zone. 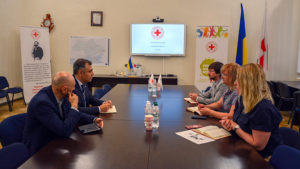 Visit of the Head of the European Office of IFRC

On July 31st the Acting Regional Director of the International Federation of Red Cross and Red Crescent Societies (IFRC), Elkhan Rahimov met with the leadership of the National Committee of the URCS. The partners discussed the most pressing issues of organizing joint assistance for 2020 and the process of reforming the national society. Mr. Rahimov noted that since 2014, the society has witnessed noticeable progress in volunteer management, organizational development and approaches in providing assistance for the people in need. Currently, one of the priority areas of URCS’s work is the development of local branches, the Red Cross centers, which play a significant role in providing care for the local population. With the assistance of the IFRC, projects on psychosocial support and financial assistance for household development are being implemented in Ukraine. Additionally, an information campaign on measles protection was carried out. 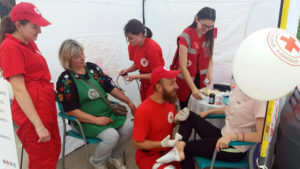 The URCS emergency response teams (ERTs) are regularly on duty and providing first aid at mass events across the country. For example, from July 13th to 15th, the ERT of the National Committee provided first aid to parachute jumpers and assisted in search for those who landed outside the airfield. From July 13th to 14th, volunteers from Ternopil, Ivano-Frankivsk and Vinnitsa were on duty at the pilgrimage in the village of Zarvanytsya (Ternopil region). The team provided first aid to people with heat strokes, arrhythmias, pressure disorders, muscle sprains and joint pain, as well as skin damage. From July 27th to 28th, ERT of the National Committee provided first aid to the participants of the Cross Procession in Kyiv. On August 24th, ERTs took part in various festivities around the country to celebrate Independence Day. 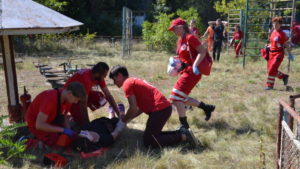 The annual meeting of the Red Cross emergency response teams was held on August 21st to 24th in the Kiev region, with the support of the International Committee of the Red Cross and the Danish Red Cross. Volunteers of the URCS and Belarusian Red Cross Society carried out search and rescue exercises in the training grounds for scenarios like building explosions, terrorist attacks on sport events, and accidents. Volunteers also participated in information sessions on the concept of safer access, coordination of spontaneous volunteers, first aid and more. The total number of emergency responders involved was over 100. 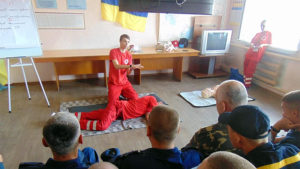 With the help of the national society’s instructors, more and more people are learning first aid skills, which are especially important for those working closely with people. On July 9th volunteers held first aid workshops in the Luhansk region for workers of the fire and rescue department of the Rubezhnoye and Severodonetsk branch of the Probation Center. From July 23rd to 24th, the instructors of the Ternopil region branch taught first aid skills to the children of the camp in the village of Unizh. On August 5th, the First Aid Summer School was opened in Odessa. During the week, 30 trainers from all over the country exchanged experience and improved their skills in teaching first aid. Also, within the framework of the event, there was a thematic quest and training of school and kindergarten teachers as well as cultural workers of Tatarbunar district. The URCS volunteers continued to educate children and adults about measles prevention. The campaign attracted 255 volunteers and employees active in seven oblasts (Chernivtsi, Vinnitsa, Ternopil, Odesa, Kharkiv, Ivano-Frankivsk, Kyiv) and the city of Kyiv. The Red Cross held informational sessions for example in educational and medical institutions at public events. On August 25th, a flash mob “Vaccine works!” was organized in regional centers drawing attention to the importance of vaccination. 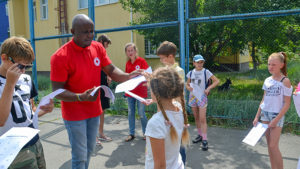 The URCS is active in providing psychosocial support for vulnerable groups. Regular board game evenings for people with disabilities is ongoing activities in Severodonetsk city in the East of Ukraine. In Vyshgorod (Kyiv region) a native English-speaking volunteer teaches English to children from vulnerable backgrounds. In Kurakhovo (Donetsk region) the children showed their drawing skills with threads. In July, a psychosocial support room was opened in Konstantinovka, Donetsk region, that will host events for everyone from toddlers to the elderly. The room is fully-equipped as it has office supplies, workshop materials, board games and more. At the end of August, the URCS partners from RED NOSES Clowndoctors International arrived in Ukraine. A team of clown doctors will visit Lugansk, Kharkiv and Zaporizhzhya regions and over the course of three weeks, they will bring joy to vulnerable children. On July 30th, representatives of the URCS and Porsche Finance Group Ukraine visited the National Children’s Specialized Hospital “Okhmatdit”, which was provided with three bed monitors worth a total of 121 368 Ukrainian hryvnia as a result of cooperation. The equipment is intended for monitoring the basic physiological parameters of patients in real time and allows to detection of symptoms requiring treatment. The facility had an urgent need for such monitors since children from all over Ukraine are treated there. Furthermore, as a result of the Red Cross campaign “Boots from Nicholas”, the hospital was provided with nine vacuum aspirators. 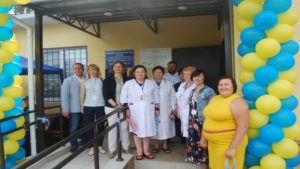 On July 30th, a solemn opening of the restored food unit of the Svitlodar Hospital was held in Donetsk region, and on July 31st, the medical-obstetric points (MOP) were opened in the villages of Malynivka and Andriivka (Slavyansk district). The project was implemented by the URCS with the financial support of the Luxembourg Red Cross in collaboration with the German International Cooperation in Ukraine (GIZ). MOPs are built according to European standards, which provide advanced equipment and comfortable conditions for patients and medical staff. Each room has a family doctor’s office, treatment room and examination room. 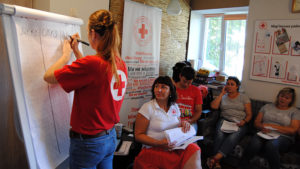 Information sessions on international humanitarian law (IHL) were held in Volnovakha and Maryinka district branches of the URCS (Donetsk Region). Volunteers and staff learned about the structure of the International Red Cross and Red Crescent Movement, the concept of IHL, humanitarian principles, the protection of the Movement emblems, and more. The training was conducted by certified IHL trainers, currently numbering 24 in the Society. It is through IHL that the Red Cross has the opportunity to do their work to assist victims of armed conflict.