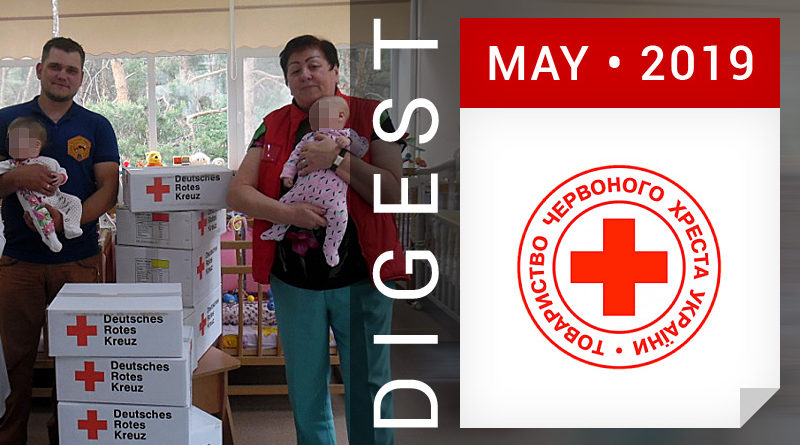 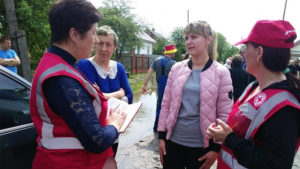 Due to the high precipitation in the Rivne region, settlements were flooded. The greatest effects of these weather conditions were felt in Rokytnivsky, Sarnensky, Bereznivsky and Zarichnensky districts. On May 18, the chairman of the Rivne regional branch of the URCS with her colleagues visited Rokitnivsky district to assess the needs of the local population. The lack of drinking water was identified as the most urgent problem. 49 families received humanitarian aid such as drinking water, condensed milk, canned food and pasta. 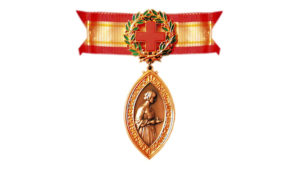 The Florence Nightingale Medal is the most prestigious international nurse award. It has been awarded to 1,517 nurses around the world. In Ukraine, 23 nurses have been awarded medals for exceptional mercy in post-war and peaceful times before 2011. This year, on May 12, a date marking the birthday of Florence Nightingale, two more Ukraininan nurses were awarded medals for their work and the assistance they provided to those affected by the armed conflict in the East of Ukraine. They are Ms Valentina Basova, head of the Dnipro and Khortytsky regional branches of the Red Cross in Zaporizhzhya region, and Ms Natalia Yakovleva, chairman of Stanytsia Luhanska district Red Cross branch in Luhansk region. 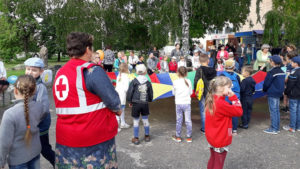 The World Red Cross and Red Crescent Day is celebrated on the 8th of May throughout the world. Theme-related events took place in most regions of Ukraine. In Mariupol city (Donetsk region), the Red Cross Festival was held. The participants of the festival were able to join the First Aid workshops, get acquainted with the direction of the organization’s activities, and receive reference materials. The Lviv regional branch held a concert and a First Aid master-class in the megamarket “Epicenter”. After the events, the participants received sweets and “Epicenter” vouchers worth 200 UAH. 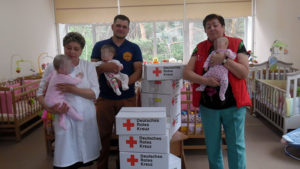 Local URCS branches continue to provide support to vulnerable groups of the population. In particular, the Kryvyi Rih branch (Dnipropetrovsk region) visited an anti-TB dispensary with Easter presents. In Ternopil city, volunteers handed Easter baskets to those in need in the countryside. In Kherson city and Donetsk region, low-income families received humanitarian kits. In Kyiv and Ivano-Frankivsk cities, the elderly were provided with food. In the Luhansk region, the Red Cross delivered the hygiene kits from the German Red Cross to an infant home. In Kharkiv, with similar help, the Goodwill Ambassador of the URCS, Oleksandr Gvozdyk visited a perinatal centre. 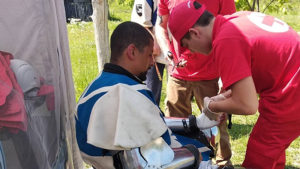 The Emergency Response Teams (ERTs) of URCS regularly responds to emergencies and provide first aid at large public events throughout the country. So, in Mariupol, the ERT of the Donetsk region provided first aid to visitors of the “Startup Gogolfest”. Some Rivne volunteers were on duty during the “First minute of the world” night campaign. The Zaporizhzhya ERT provided first aid to the rally participants on the 9th of May. In the Kyiv region, the ERT provided first aid to the participants in the Medieval battles world championship. In Kyiv city, first aid was given to 21 casualties near the construction site in Protasov Yar, as well as 38 visitors to the concert of the group “Okean Elzy”. In addition, the ERT of the National Committee of the URCS provided 450 people with food during events on European Square. 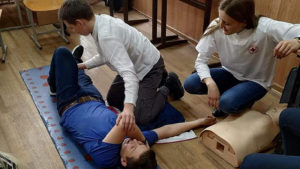 Thanks to the First Aid instructors of the URCS, more and more people are learning the skills of first aid. At the Transcarpathian regional branch, local schoolchildren were taught basic first aid. In CouNikolayev city, the vital skills were taught to the visitors of the “Scientific Picnics”. Volunteers in Vinnytsia conducted a training session for hearing impaired children. Thanks to the Bakhmut city-based branch, first aid skills were mastered by police officers. In the Chernivtsi region, rural councils heads learned some first aid skills. 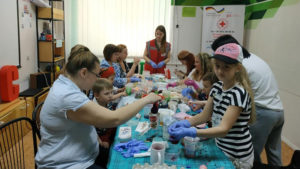 Psychosocial support activities for vulnerable groups of the population are being held. In Kharkiv city, a family master class on decorating Easter eggs took place. In Vinnytsia city, children with hearing impairments learned how to make Easter bunnies. In Vyshgorod city (Kyiv region), volunteers taught children to create cartoons. In Kherson, the members of the family club played board games. In Bila Tserkva city the spring cycle of inclusive sports lessons for children with autism and Down syndrome was completed. In Mirnograd city (Donetsk region), a family event “Time to yourself” was held. 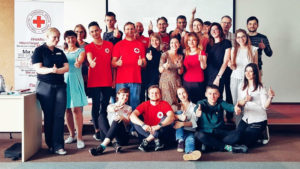 The Ukrainian Red Cross Society has trained another 19 volunteers who will disseminate knowledge on international humanitarian law (IHL). IHL protects those who are not involved in armed conflict and limits the methods and means of conducting hostilities. Future IHL trainers are volunteers with a totally different experience and education but are united by the common goal of spreading humanitarian values and training standards of international humanitarian law to the widest possible audience. 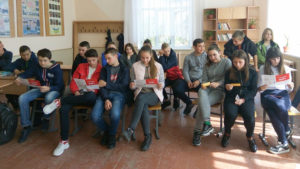 URCS volunteers continue to inform children and adults about the prevention of measles. So, in Odessa city, IDPs women learned about the symptoms and scheme of vaccination for the prevention of the disease. In Vinnytsia city, important information was provided for pupils of grades 5-11 of city schools. In general, volunteers are involved in the fight against the outbreak of measles in 5 regions: Chernivtsi, Vinnytsia, Ternopil, Odessa and Ivano-Frankivsk. In the near future, thematic meetings are planned, as well as classes, lectures and communication with doctors, parents, children, representatives of state government bodies. 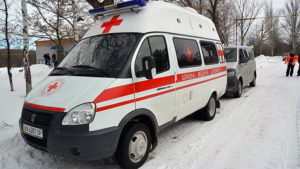 The mobile health units of the Ukrainian Red Cross Society and «Médecins du Monde» go to places on the line of delimitation of the conflict in eastern Ukraine that are not visited by doctors and ambulances. Mobile units of the Red Cross have better diagnostic capabilities due to ultrasonography, and the units of the “Médecins du Monde” have a female health specialist and a psychologist. Recently, partners exchanged their locations. Now, beneficiaries will receive better assistance, and partners will more rationally use project resources. To carry out the exchange, a great deal of work was done to study the needs of the population of the conflict zone for qualified medical care. The locations exchange became possible thanks to intensive partners’ negotiations and the involvement of experts from the International Committee of the Red Cross. 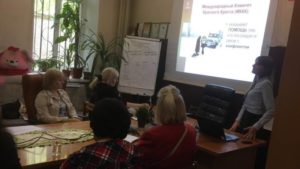 On May 15, in Mykolaiv regional branch, a meeting was held between the representatives of the International Committee of the Red Cross, the regional branch of the URCS and members of families affected by the armed conflict in Ukraine. The event was organized by the URCS tracing service, which extensive experience is primarily used for restoring family links broken during wars and armed conflicts. The theme of the meeting was “The strategy of restoring the income of the population affected by the conflict,” which was presented by the ICRC staff. Participants learned about a program that provides opportunities to rebuild long-term income where families are offered one-time cash assistance to open their own business. 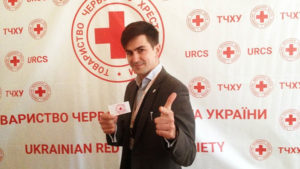 The popularization of URCS membership

On the occasion of the 101st anniversary of the URCS volunteers initiated the Facebook flashmob #UkrainianRedCrossMember aimed at promoting membership in the National Society. To support a useful undertaking, a person has to become a member of the URCS and post his/her photo with a membership card and instruction for friends on their page, passing the relay. In the first few days, tens of users from different regions joined the flashmob. The initiative continues to expand by promoting a conscious membership.